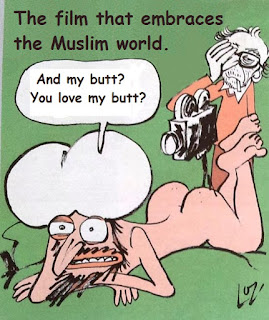 Tyranny on the march, aided by Charlie Hebdo and the many others who have caved to violent intimidation courtesy Islamic texts and teachings.

"Charlie Hebdo" editor Laurent Sourisseau has told "Stern" magazine he will no longer draw cartoons of the Muslim prophet Muhammad. Souriseau's statement comes six months after a deadly attack on the magazine's offices.

During an interview with the Hamburg-based news magazine "Stern," editor of the French weekly "Charlie Hebdo" said he would no longer draw comics of the Muslim prophet Muhammad.

"We have drawn Muhammad to defend the principle that one can draw whatever they want. It is a bit strange though: we are expected to exercise a freedom of expression that no one dares to," Sourisseau told "Stern."

The editor said that the magazine had done what it set out to do.

"We've done our job. We have defended the right to caricature," Sourisseau said.

"We still believe that we have the right to criticize all religions," the editor said, adding that he did not want to believe that the magazine "was possessed by Islam."

"The mistakes you could blame Islam for can be found in other religions," Sourisseau noted.

Not anymore.  Charlie Hebdo is giving in to violent intimidation and trying to rationalize it so as to assuage Muslims.  They don't realize, or are deliberately blind to the fact that the alligator will eat them last.

Read it all
Posted by Unknown at 8:46 PM

Our debt, courtesy those we foolishly continue to vote for

Muhammad as the Leader of Islam

It's easy, just go to www.actforamerica.org and there you are. Join thousands who believe there is a problem with Islamic doctrine and radical jihadists, and want factual, realtime information on what some adherants of the "religion of peace" are up to these days.

The Only Free Democracy in the Middle East